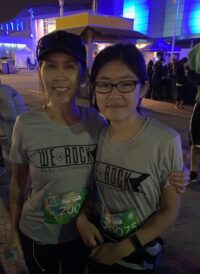 I live in Mission Viejo with my three kids and my husband of almost 20 years.  WeROCK is an amazing program, and I am so glad my friend told me about it back in 2019. I have been a parent member of WeROCK for 2 full seasons when both my daughters went through the program. My eldest daughter did her first season in the 2019/2020 year when the pandemic shook us all, and she conquered that full marathon virtually (which I felt was a lot harder than if it would have been in-person) and that was a huge accomplishment.  My youngest daughter is doing her second full season this year.  What I love about this program is that is more than about running, it’s about building confidence and self-esteem.  I am so looking forward to being a part of this program in this role as a coach.

Races I’ve Done in the Past

It was six years ago that I started running. I did my first 10k race with the Pediatric Cancer Research Foundation in March 2016 and that was it, I was hooked and looking for my next race.  Less then a week later, I did a 5K Rabbit Race and placed 3rd in my age division.  By the end of the year, I did my first half marathon race with RunDisney at Disneyland. Since then I’ve ran numerous races, mostly half marathons and did my first full marathon at the OC race in 2019.

Running to me was like therapy and I feel that the kids will find that this form of therapy can help them so much in their mental health and in life. 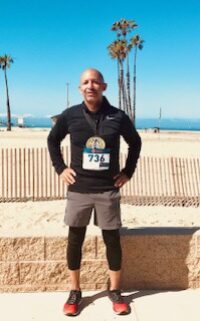 Hello, I am Coach John and this is my first year as an assistant coach with the WEROCK Newhart team.  My son, Miles was with the program the last two years and I am looking forward to working with the team this season. 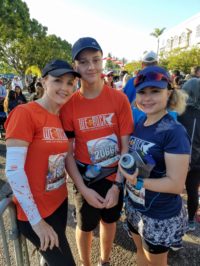 Hi, I’m Coach Melanie and I used to think runners were crazy. I didn’t understand why my daughter, Lexi (Coach, too), wanted to run daily. After several years of making excuses as to why I couldn’t run, I finally gave it a try and joined her.

Shockingly, running wasn’t as bad as I thought it would be. New clothes, great company, more snacks and bragging rights. What’s not to love? Plus, the running community is full of phenomenal role models for our children. It’s a win-win.

I’ve had the pleasure of running races with the WeRock crew for nearly two years and have now run two marathons with the students. One of them was alongside my oldest and youngest children with the second with my daughter. What an honor and forever memories.

My favorite race was running the Surf City half marathon with my youngest son, Chuck. While it rained for 8 miles, we did it together and finished strong with a crowd of people handing us snacks and medals. In our family, running is more than a sport; it’s a way to connect, practice perseverance and learn that sweating and working hard can’t hurt you. In fact, it makes you better.

For the past nine years, I have worked full-time with athletes with developmental disabilities. This experience continually challenges me to view activities, even running, from different perspectives.

I’m excited to coach with WeROCK at Newhart and look forward to an amazing year. 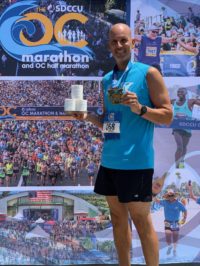 Hey there!  I’m Coach Andrew, Head Coach at Newhart Middle School for the 2022-2023 season.  This is my 4th season coaching with WeROCK and 3rd as Head Coach of Newhart.  I love coaching and spending time with these amazing kiddos.  Getting to know each of these kids, learning what they’re about and helping them see and achieve their goals is what I enjoy most about being part of the program.

What’s my history with WeROCK?

My son, Brian, ran as a first timer / 8th grader four years ago.  Before starting with WeROCK, he had never run farther than the PE mile and never considered himself a runner.  Only a few months into the season, his PE mile times went sub-7, then sub-6.  He was getting recognized by his peers as a runner and his self-esteem skyrocketed.  I tried to come to as many Saturday practices and races as possible, getting to know the other runners so I could cheer them on and watch their transformations, as well.  When the season was over, I knew that I wanted to offer my time to coach and be around these kids next year, even though my own child wouldn’t be part of the program.  I want to continue giving back to future groups of runners what the coaches gave to my son.

It’s always fun to hear a coach’s race history!
I was never really a big runner when I joined WeROCK.  I’d run a couple of half marathons a decade earlier but stayed active playing basketball and hiking.  But now I proudly hang my bibs, race medals, and consider myself a full-fledged member of the running community.  I’ve completed 3 marathons, dozens of half marathon and above distances and even completed the Goggins Challenge (4 miles, every 4 hours for 48 straight hours) on my own last year a few weeks after the marathon.

Favorite WeROCK race
I really love the Citrus Heritage half marathon.  It’s really cool going through the orange groves and there is usually some lady passing out donuts from her front lawn along the last 2 mile home stretch.  It’s also a huge step up for the kids when their previous longest race to that point was a 10K so everyone leaves feeling pumped up and prepared for the 2nd half of the season and all the miles that lay ahead.