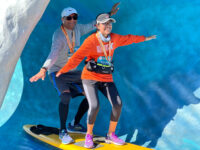 Hi! I am coach Raj. This will be my first season as an assistant WeRock coach. I am excited to help and run with the great kids in Ladera Ranch. I enjoy running as it clears my mind and I also get some exerciseJ Growing up in England, I played many sports mostly indoors, because of the weather. I started cross country running in middle school and it became one of my favourite activities. I run for fun and enjoy the outdoors at my own pace. Living in Orange County, I am fortunate to be able to run year-round; but I do miss running in the rain.

My History with WeRock
I was introduced to WeRock when my daughter, Trisha, started at LRMS and joined in 2021. I am not sure why she joined, but I was excited that she did. I am super impressed with the program as she is not a runner, but has already run several half marathons with WeRock. I ran with Trisha through the season and was able to rediscover my love of running. The WeRock training program has made a positive change in our lives. ALOOOOOOHA! Coach Emi here!  I learned about We Rock when I signed up my son during the 2021 school year. He was extremely reluctant at first and only agreed to participate in it for 1 month, but he not only completed 1 month, but 3 seasons thereafter. In my time watching my son participate in We Rock I have the pleasure of meeting so many amazing families and amazing athletes with GRIT who are extremely kind and encouraging to one another.  I loved watching my son smile as he read the kudos that he received from his peers and seeing the nice encouraging words he posted in social media in response to his peers’ various athletic accomplishments.    I’ve had the pleasure of participating in a few of the races, and my favorite one was probably the hardest run, and that was the trail run at El Moro.

Growing up I played a few different sports- field hockey, boxing, and track and field. It wasn’t until my 20s that I discovered my love for running.  I have completed 4 marathons and over a dozen half marathons- running the majority of the half marathons while pushing my son in the jogging stroller. After running some long distance races I know that a lot of what we do is mental, and it takes a certain level of stubbornness to continue when your body wants to quit. My favorite running quote is: “Running is nothing more than a series of arguments between the part of your brain that wants to stop and the part that wants to keep going”

For work, I am an Administrator in the world of Special Education and Mental Health, and I have found that taking time out, especially working out, is what I need to be my best self and the best mommy I can be.  I look forward to meeting all of the amazing kiddos and families and will be crossing my fingers for an amazing injury-free season!

Hi, I’m Coach Todd. This will be my fourth year as a coach with We ROCK. I grew up in Costa Mesa
and was a runner in High School. Later I became a competitive mountain biker and cyclist. I have
also done some fitness coaching, helping people meet their fitness goals. Fitness has always been a
passion of mine, even in those times in my life when I let my own fitness slip. Having a goal is
always a great way to get motivated, WeROCK provides that goal.

What’s my history with WeROCK?

My son JT joined We ROCK for the first-time in 2018 as a 6th grader at Ladera Middle School. He
completed the full marathon and the look of accomplishment on his face was priceless. Over the
past five years, being involved with We ROCK, I have been inspired to see how the kids progress
and the sense of accomplishment they have when they achieve their goal.

It’s Always Fun to Hear a Coaches Race History
Even though I was a runner “back in the day”, I never competed in any race over a 10K. in 2019,
while training as a coach with We ROCK, I completed my first full marathon, virtually with the OC
Marathon. Doing the full marathon on our own was a challenge, but with the support of our family we
finished! It felt good to complete our goal despite the challenges of the COVID shut down.

My Favorite Race that WeROCK ran during the season
My favorite race was the Citrus Heritage Half Marathon. I really love the course and set a new PR! 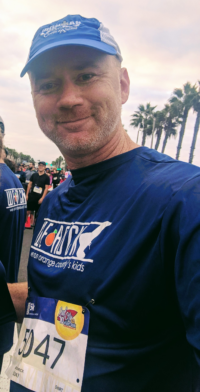 I am the founding coach at Ladera Ranch Middle School going back to 2018. I have a storied history in endurance sports but even I had to do a double-take with when I first heard about this program.  Being given the chance to introduce these kids to something that positively changed my life (and theirs hopefully) so significantly is a blessing and I am ecstatic to have been given the chance to do so. Thank you WeRock.

I’ve run since middle school and the sport has introduced me to a lot of great people and things so I want to pass that forward. I believe in the term “Embrace the grind” and hope to pass some of that along to help these kids cross the finish line.

I found running cause I was the only kid who liked running laps at the end of practice for other sports.  That parlayed into years and decades now of running and triathlons including Ironman Lake Placid, Couer D’Elene, California and others..

My favorite race that WeRock will run during the season

The Citrus Heritage half marathon course because it was a cross country-esque course, running through the orange orchards. It was also the first time seeing the kids run a half marathon and they tore it up!