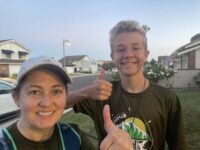 Hi! I’m Jen and I’m a Saturday coach. This is my first season coaching with WeRock. I’m a working mom of 3 boys who loves beach volleyball, board games, and being at the beach. I have run on and off over the years and have found that running quiets my mind and boosts my mental health better than anything else.

I started with WeRock thanks to my middle son Graham. He started with the team in January after deciding to try a new sport. He found his niche and I loved seeing his eyes light up as he talked about his runs and watched his times drop. I decided to follow the same training plan and joined him for the Saturday runs. I’ve always run solo but found that running with a group was so much more energizing. I was moved by how much support the team gives each other – lots of “good jobs!” and high fives as they pass each other. I ran a half marathon about 15 years ago but wasn’t sure I had the motivation to do another one. But being out on the bike trail with 100+ other people made it so much more enjoyable!

There is also nothing more fun than wearing a We Rock shirt on the OC half/full marathon course. There were over 100 kids from We Rock running in May. It’s amazing to have that many families in the crowd cheering you on. WeRock is also well known in the running community, so other runners in the crowd are cheering you on too.