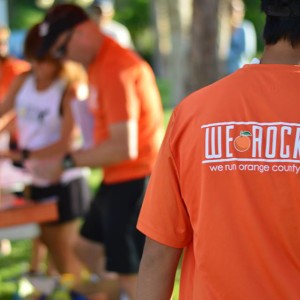 Hello! My name is Tom Bogiatzis and I am an Assistant Coach with Team Ladera at Ladera Ranch Middle School. The Lions at Ladera call me “Mr. B” and some can even pronounce my last name, Mr. Bog – At – Sis. I also happen to be a school counselor and I am able to witness the dedication of our We Rockers, with their academics, personal commitments while training to run their first marathons. Simply Amazing! I always tell students we all learn to overcome obstacles in life and “anything worth doing, takes consistent effort over an extended period of time,” which exactly describes training for a marathon. We learn so much about life while training to run a marathon.

I grew up in Brooklyn, New York and lived in Connecticut before moving to California in February of 2007. I grew up playing baseball and football, most of my life, and I was always curious as to why people train to run long distances. I enjoyed sprinting for team sports growing up, but never considered running long distances because it took too much time and effort. I then met Rose Antonatos, Assistant Coach, when I moved to California and she organized SRLA – Students Run Los Angeles to train for the LA Marathon in 2008.  I thought I would run a few miles until I needed to buy a new pair of sneakers and then go back to wearing cleats playing baseball. Before I knew it, I was running 10 miles on Saturdays and I thought seriously about running 26.2 miles. I finished the Los Angeles Marathon and so did all of our students!

This is my first year as a coach with WeROCK and I have learned so much from Coach K and all of the other coaches with WeRock. I am motivated by all the student leaders and all of our runners as the group gets closer to finishing the OC Marathon in May.

It is always fun to hear a coaches race history!

I finished the Los Angeles Marathon in 2008 and have completed five half marathons since 2008.

Everyone has a favorite race WeROCK runs and mine is the Surf City Half Marathon. We ran on generally a flat course, near the ocean, in the wind driven rain, on Super Bowl Sunday, waiting for the Patriots to win another Super Bowl.